«LHR is not a doom! How to identify if a GPU is LHR? How to mine on LHR GPUs?»

2021 brings mining to its records, and only lazybones is not mining with Kryptex!

Video cards snapped off the shelves like hotcakes, and GPU manufacturers inflated prices.

But not only with the prices of GPUs, manufacturers decided to fight mining!

LHR (Lite or Low Hash Rate) is a hardware or software limitation of a video card that reduces its performance in mining. Most of all, this affected the mining of the popular algorithm Ethash. Only Nvidia 3000 series graphics cards have the LHR lock.

For example, the top card RTX 3090 does not have LHR protection; you can safely buy this GPU without being afraid of performance loss. It has no limitations and is ready to run up to 125 Mh\s on the Dagger Hashimoto ETH algorithm, but don’t forget to cool it down😅

Mobile (laptop) graphics cards RTX 3000 family also do not have LHR protection (for a while).

All RTX 3080 Ti and RTX 3070 Ti graphics cards have LHR lock with no exceptions!

All RTX 3060 video cards are LHR versions only, but this lock can be of two types.

How to determine if the video card LHR is locked?

When buying an Nvidia RTX 3000 series graphics card, you probably want to understand what kind of graphics card you will get? There are several ways to determine, and now we will tell you about them!

Method one — look at the naming! 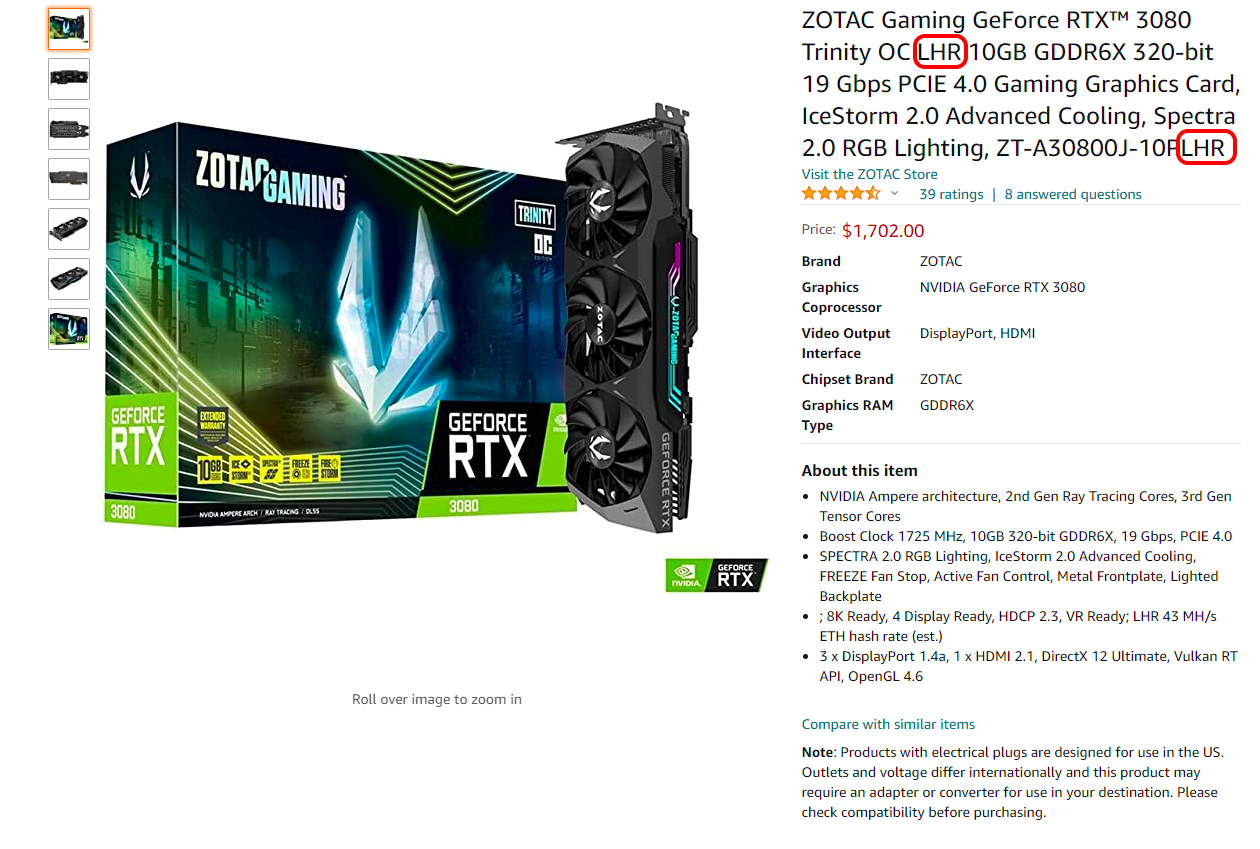 If the card naming didn't say that it is not LHR, or there is no such mention at all — that doesn't mean it's not LRH! It can be either an LHR or a regular video card without LHR.

The second way — look at the product code.

All video cards have their unique number or product code.

Each manufacturer has its own habit for labeling video cards.

You can always find these designations on the video card's box or the GPU itself. In addition, the same tag is indicated on the websites of computer stores.

All manufacturers have released new revisions of video cards with the release of LHR modifications.

Such companies as ASUS, Gigabyte, Palit, Gainward can hide both LHR and non-LHR cards behind the product code. As a result, the chance of getting an LHR-locked video card with revision V2 or V3 is much higher.

The third way — by the serial number and the release date.

Each GPU has a serial number used to determine the release date of this video card.

The manufacturing of LHR GPUs started at the end of May 2021 (week 22), which means that all video cards released before this date have no mining limitations.

Therefore, the video card could be an LHR if the release date ends in May 2021 or later.

Here are some examples:

If a GPU is released after the 22 (May) 2021, it does not mean that it is a 100% LHR because the manufacturer could have some old chips in stock and can use them in manufacturing. The later the release of the GPU, the higher the chance to buy an Nvidia video card with the LHR.

The fourth method — look at the chip ID.

It's one of the most reliable ways to check!

You will need CPU-Z and GPU-Z to check the ID.

Most likely, when buying a video card in an online store, you will not have such an opportunity ( but you can try to negotiate 😉)

This method is suitable when buying a video card in the secondary market or in a local store where you can return the goods in the first days after purchase! 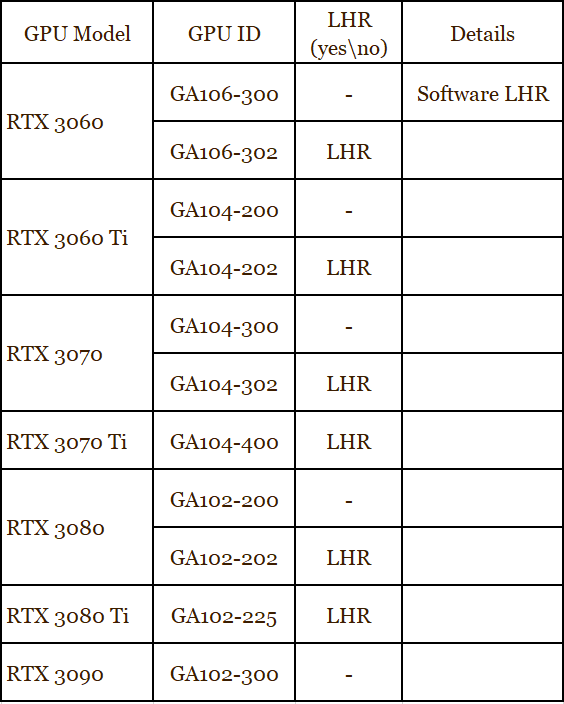 Thanks to this table, you can quickly identify which GPU you got; let's take a look at some examples:

1.Nvidia RTX 3060 Ti. Start the CPU-Z program, open the Graphics tab, find the Code Name value. The value is GA104-200, which means it's a video card without LHR — congratulations! 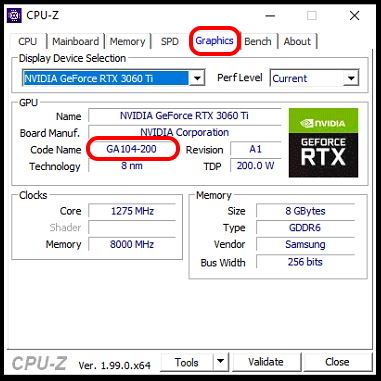 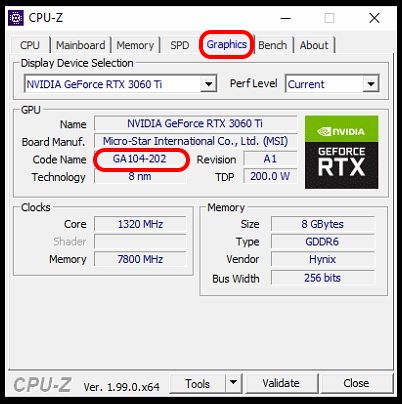 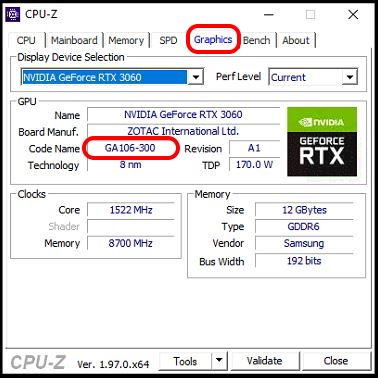 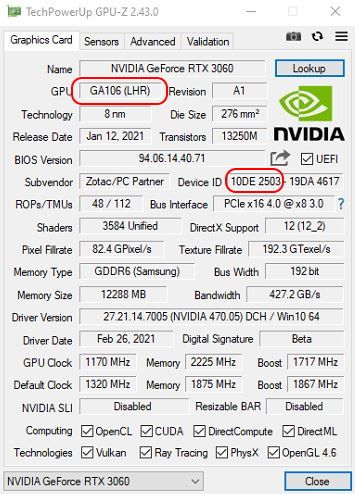 If there are no other ways how to determine whether it is an LHR GPU or not:

1.Put the GPU into your PC. 2.Start Kryptex. Open the settings and scroll down to the "Misc" tab. Tick the box "Show miner windows”

3.Start mining in Kryptex algorithm Dagger Hashimoto ETH (Ethereum) using one of the miners Trexminer, Gminer, or NBMiner 4.In the miner's window, look at the identification of the card.

Miners' developers have managed to bypass hardware blocking. Now the LHR cards can squeeze out up to 74% of the performance of GPUs without the LHR.

Almost any miner in Kryptex can do this automatically; no additional settings need!

In each new version, miners' developers better polish their algorithms, and they manage to squeeze out an additional 1-2% of performance.

But, who knows, maybe a year later, no one will remember the difference between LHR and non-LHR cards?

All RTX 3060 video cards are LHR versions only, but this lock can be of two types. 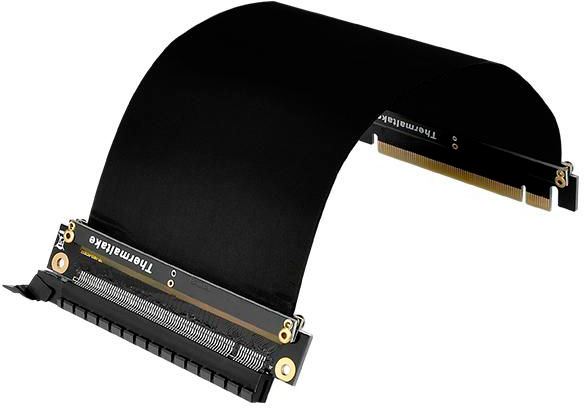 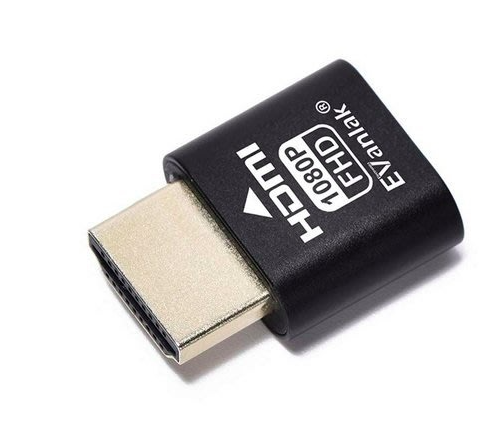 What miners should do with all this?

We've tried to cover the most popular scenarios, but it's nearly impossible to cover them all.

They manufacture cards from new components, by which it is difficult to determine which video card you got.

The manufacturers release new GPUs that have not been tested in mining yet — RTX 3050, RTX 3090 Ti

Ad who knows, maybe they will add mining protection for mobile video cards?

The most important thing: Kryptex is always with you! Whatever video card you get, you can always mine profitably with Kryptex!

Discuss the latest crypto news and share your ideas! 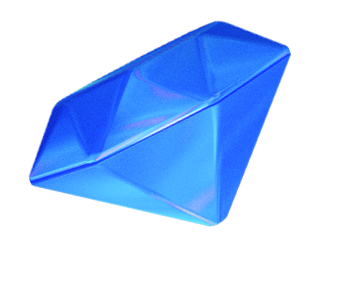