Do not update your Nvidia driver, if you have graphic cards with LHR lock!

What to go with in mining? AMD vs Nvidia

The Reds or the Greens? What are the technologies behind? Cool AMD and cooler Nvidia, or vice-versa? Which one makes the most money out of the buck? Answering all these questions in the following article and sharing tips on how to get the best GPU!

AMD and Nvidia rival each other for the mining GPUs niche. (As well as in any other niche.) Companies offer different technologies and approaches to attract customers of different needs. The image below depicts the most recent GPU architectures, one next to another, to understand each's engineering differences.

The critical distinction between the two (apart from the block construction) is in the task scheduling. Nvidia utilizes a universal platform to plan and compute simultaneously in a two-step cycle; it is called CUDA. On the other hand, AMD went for a process separation with the SIMD and four events in a cycle.

Given the differences, the thing is that none of the approaches reaches the performance limits in terms of bandwidth of an architecture. These simply do not affect hashrates or frames per second at all. The video chips and clock speeds do.

Worth to note, one new color is coming. Intel had been planning to enter the GPU market for quite a while. Last year the Blues finally made an announcement and hosted several presentations regarding the future graphics lineup. It is believed, the cards will receive the combination of architectures and offer a "moderate price tag." Nevertheless, it is only performance, which will determine the sufficiency of the newcomers.

How do GPU models differ?

Lineups are created to allow every customer to find the perfect video card in any budget. Top-tier solutions lack any weaknesses; they are ready for tough loads, whereas cheaper options receive worse chips, less memory, and other limitations. Although, cheaper != worse since it could be practical to find a balanced trade-off between price and performance and benefit from that!

Modern GPUs mostly board enough fast memory for any task; nearly every option out on the market has at least 6Gb of GDDR6. It both allows games to load dozens of smooth high-res textures and store bubbling DAG files in mining. Smaller VRAM size is dangerous in 2020, according to our statistics.

Found on several AMD cards, HMB2 simply utilizes a different approach to bandwidth and does not affect hashrate in any way

Whether there are Hynix, Samsung, or Micron chips in the VRAM, it says a lot about the GPU. One can overclock a video card, and it is known, Samsung's go the highest among the competition in the memory field. We have already covered the topic in memory tuning and overclocking, Claymore arguments, and ETHlargementPill articles. Instructions and examples included. Memory and timings overclocking can grant you up to 10-15% in hashrate!

Automation calls and Nvidia users benefit the most. Overclocking is much more comfortable and user-friendly than AMD, whose users statistically tend to Google for instructions a lot.

GPU cores matter the most, be it Nvidia's CUDA or AMD's Streaming Processors. The more of these the chip has, the more powerful and profitable it is. Do not forget about the core clock speed! 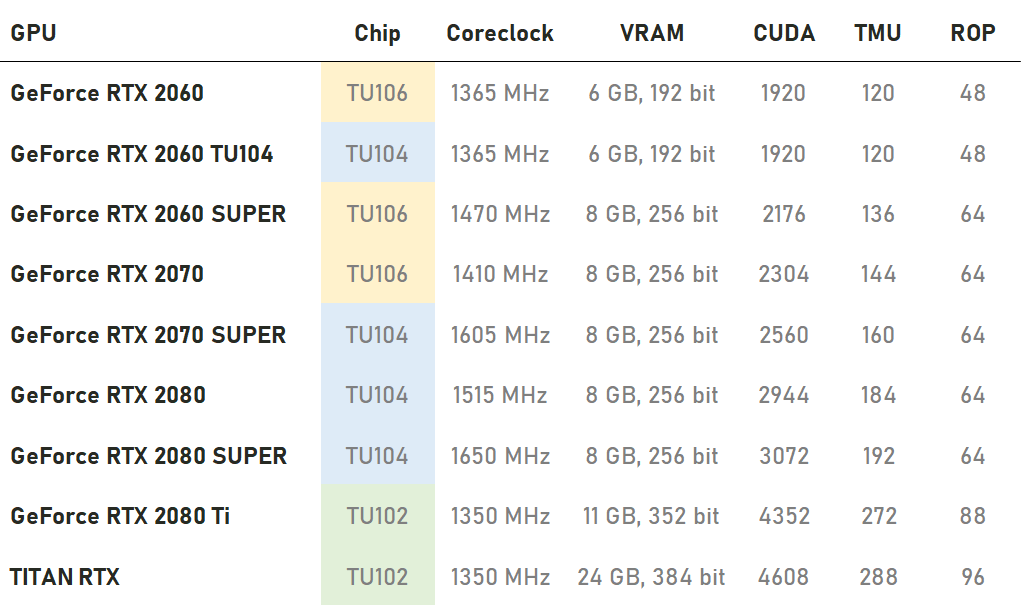 Producers put different chips into different models within the lineup. RTX 2080 has TU104 with 2944 CUDA cores, the best configuration the chip has. Weaker cards with the same chip receive it with the entire compute units disabled because of the rejection procedure. To bring prices even more down, vendors pack the cards with less memory. For example, RTX 2080 Ti and TITAN RTX share the same TU102 but the latter caps at $2500 versus $1200.

But old AMD cards cant agree with that simple logic. RX580 is the same RX480, but with a little overlock. For some reason, the marketing team decided to confuse the customers and gave the chip a new name. It is always important to look up for additional details on each card to ensure no one tricks you.

Fortunately, current AMD lineups are free of weird marketing decisions. RX 5700 and RX 5700 XT perfectly align with the best-card-with-the-chip and rejected-chip model. And what is cool of AMDs, these often carry a feature to flash the GPU BIOS and bring the weaker card's performance to the top level!

GPU designs vary a lot, and it is OK to ignore the most advanced options. There is almost no difference in hashrate between the top and best-for-the-buck editions of the same video card. Go for ASUS, Gigabyte, MSI, or whatever fits in your budget the most. Even the "weakest" heat spreaders and fans run any given card cool. More on that in our video on Youtube: 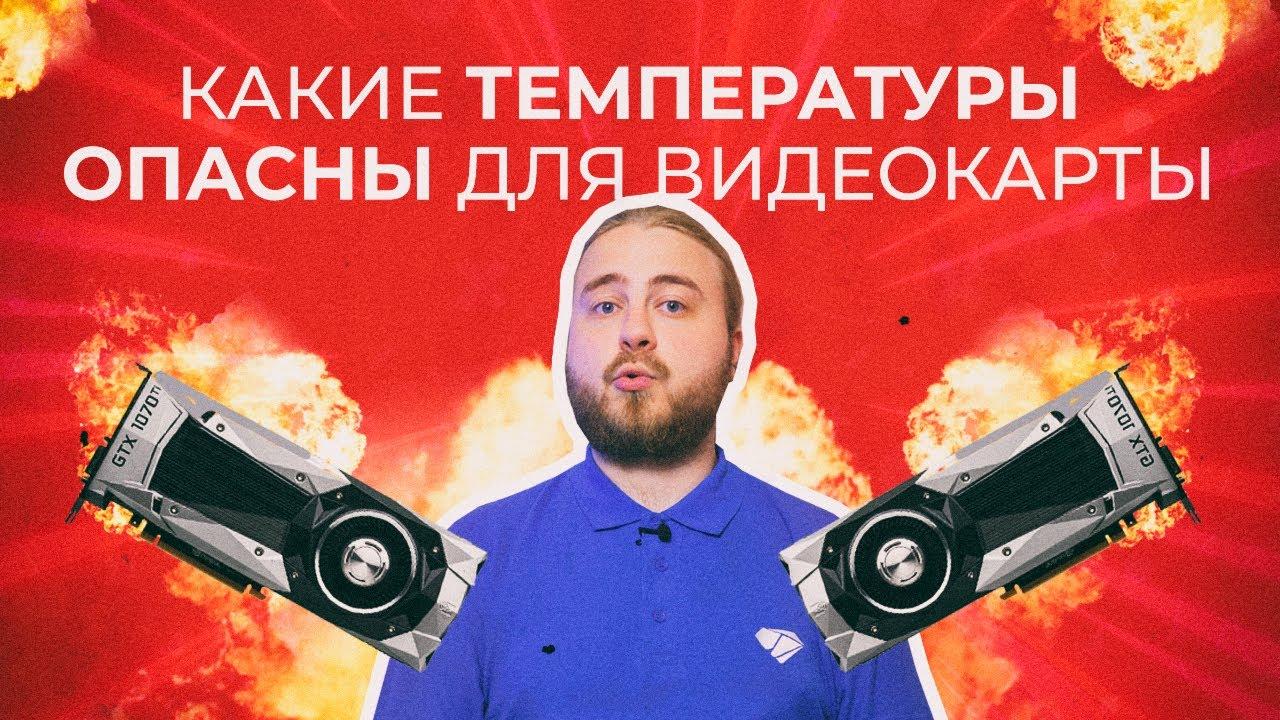 Back in 2015-17, one could find AMD-exclusive or Nvidia-only miners, whereas today, nearly every piece of software supports products of either company. Kryptex packs the most profitable up-to-day algorithms, which are available to both AMD and Nvidia users!

Nvidia is open to experiments and "oh, that sweet coin" searches, while AMD was historically the most profitable and stable with the DaggerHashimoto for Ethereum. Nevertheless, Kryptex always automatically switches to the most profitable algorithm to get the most out of your GPU!

Some AMD owners say, they've been on Ethereum for years straight

So, AMD or Nvidia?

None of the producers could be put one above another. Every customer should take "Listen to Your Heart" song's advice and find what fits the best personally. One should better focus on some models comparison, rather than merely fortune on Reds or Greens.

But Nvidia folks are lucky in some ways. The universal driver requires no mode changes to switch from gaming to mining and back. And electricity bills are generally cheaper. (While at the same time it is colder inside in winter ❄)

It is the card, which selects the user, not vice-versa 👻

The best video card on the market

Always go for a model, not the producer!

It is best to use prior experience to guide you through the debris. Kryptex's Best GPUs for mining page will show you the most profitable video card by daily income or payback, display the perfect hashrates, and help you with the tuning! We update the list regularly.

Need some help? We are here for you 👋🏻

Message us; we will help you with GPU pick or any other question 💪🏻